"I made my cursillo weekend in October of 1974.  It began a lifelong journey to the Lord.  About 10 years ago I began a group called Credo Recovery.  It basically is a weekend for those recovering from addictions of any sort.
The blessing of the cursillo method is something that has stuck with me all these years and I praise God for it.  Credo Recovery is now in Illinois, west Virginia, Maryland and New Jersey.  It has been a blessing to hundreds of recovering folks.  If it were not for Cursillos de Cristandad it would not have come to be.

(More information from Ed Caputo received by e-mail on December 6, 2014) 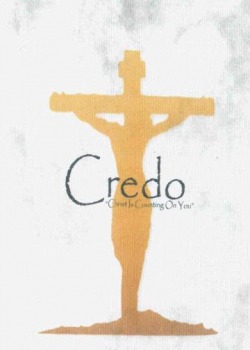 "What Is Credo Recovery?

Credo Recovery (CR) is a dynamic FOURTH DAY COMMUNITY established from the Cursillo and Kairos Model.  It is designed to help men and women who desire recovery from addiction thorough the indwelling power of Jesus Christ.  Credo is a highly structured community-building method centered upon a team approach beginning with a Three Day Weekend Retreat.   The Weekend retreat is preceded by an intensive Pre Weekend Team Formation, and followed by weekly instruction and prayer and share accountability.

Credo Recovery (CR) is delivered in camps, retreat centers, rescue missions, or Adult Rehabilitation Centers like those at the Salvation Army.  Each Weekend Retreat begins by forming a team of lay-men or women and spiritual directors who meet together for approximately 30 hours of spiritual team formation before engaging the new participants in a 3 Day event, usually conducted on a weekend.  The 3 day Weekend is followed with  weekly instruction and accountability.

Where Did Credo Recovery Come From?

Credo Recovery has a rich history.  Today there are currently 80 or more Fourth Day Movements that sprang from a small seed planted and nurtured in Spain by young men from Catholic Action.  These men had a passion to bring spiritual renewal to their country after the devastation of the Spanish Civil War.  During the decade of the 1940’s, the fruit of their prayer, planning and pilgrimage became evident in a movement, which came to be know as Cursillo de Cristiandad, (A Short Course in Christianity).

From that beginning, the Cursillo and its offshoots began to grow taking its unique method for renewal to nearly every country in the world.  Although it is impossible to know the number of people who have participated in this world wide movement, some estimate that during the past six decades as many as 45 million people have experienced some form of the Cursillo.

Today every mainline Protestant denomination has copied the content and structure of the Cursillo method. The first American Cursillo began in the 1950’s in Texas.  Not long after that, a Lutheran version was developed, under the name Via de Cristo.  Then  Methodist’s adopted the Cursillo Method and developed a worldwide movement called Walk to Emmaus.   The Presbyterians call their movementPresbyterian Pilgrimage.  Tres Dias is an ecumenical adaptation of the same movement.  Kairos Prison Ministries International was established in the mid 1970’s designed for men and women who are incarcerated.   Today Kairos serves the residents in over 300 prisons in 34 states and nine

countries. Finally, we come to Credo Recovery the newest of the Fourth Day Communities.  Credo Recovery serves men and women who want to recover from the vice-grip of addiction.  Credo began in New Jersey in the mid 1990’s and is currently established in Illinois and five east coast states, West Virginia, Maryland, Pennsylvania, New Jersey and New York.

What Does Credo Recovery Do?

Credo Recovery, like the other flourishing Fourth Day Communities is based upon the teachings of Jesus from the New Testament.  Credo focuses on seeking intimate friendship with God in order to break unhealthy attachments and addictions.

Credo’s goals method and structure are adopted and adapted from the KairosMethod and it works very much like all the other Fourth Day Communities, which were formed from the Cursillo Method.  Our goals are designed to offer redemption, teach spiritual disciplines, help establish personal devotion to God through Jesus Christ and encourage love of self and others through Christian Community."