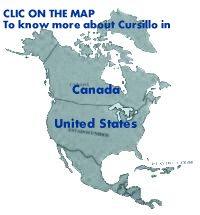 The Cursillo Movement in North America

The Cursillo Movement started in the United States in 1957. American cursillistas then helped to propagate the CM in a large number of countries in Asia, in Europe, Canada and the Caribbeans. English speaking Cursillos began in Canada 1963, Australia 1965, Korea 1967, Sri Lanka 1964, England and Ireland 1970.

These countries came together in 1973 and formed until recently the "International English Language Group" (IELG). In 1980, together with the Latin American Office of the CM (OLCC) and the European Working Group (GET), they constituted the World Body (OMCC).

The CM began in the English speaking countries of the Caribbean as follows:
Jamaica 1967, Trinidad 1970, St Vincent 1973, Barbados 1974, Grenada 1976, and together with Guyana and Monserrat they became members of IELG and in 1985 formed a Caribbean body to assist in communication and the holding of conferences in their area.

In 1998, the United States, Canada and Caribbean countries formed the NACG: NORTH AMERICAN/CARIBBEAN GROUP, which replaces the English Language Group (as did the GAP : Asia Pacific Group in 1990).

The NACG International Group consists of the following countries: